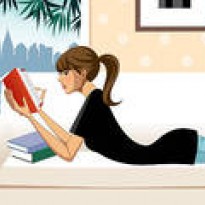 Wrapped up with a nice blood red ribbon! 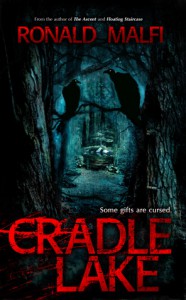 Synopsis: Alan Hammerstun is desperate for help when his wife Heather, who has survived multiple miscarriages, becomes suicidal. When he inherits his uncle's home in the foothills of the Great Smokey Mountains in North Carolina, he packs her up for some serious healing thinking it is just the thing they need.

This town has some big secrets, though, and the number one secret is the lake which the town surrounds. When Alan discovers that the lake has some healing powers, he decides that it might be the best thing that Heather needs. When Heather becomes pregnant again, Alan finds out the true secrets of that lake's healing powers.

As the cover says, some gifts are cursed.

My opinion: I love me some Ronald Malfi writing. This man can go creepy, creepy, creepy! When he ties things up with a nice red ribbon...that ribbon is blood red. Cradle Lake was no different. The second I saw this book even being advertised, I knew I had to have it. Lucky for me, my library gets RM books.

As to be expected, his writing was excellent in this book and the release of the story was slow and methodically that kept me guessing. Character development was rockin' with watching the slow unwinding of characters into even deeper madness. In the beginning of the story, I felt that I would have compared it to Stephen King's Pet Cemetery, but then he took it in a twist and it moved away from there.

Would I recommend? : Already have and always do, but I also recommend that if you have not read his book Floating Staircase, which still has a 4.5 rating on Amazon even after 130+ ratings, have that be your first.